The design of the car means that it is not easy to get in and out of, but I would imagine that if Autochair can fit a Milford lift into a Porsche Boxster Spyder, they they must be able to fit one into anything. 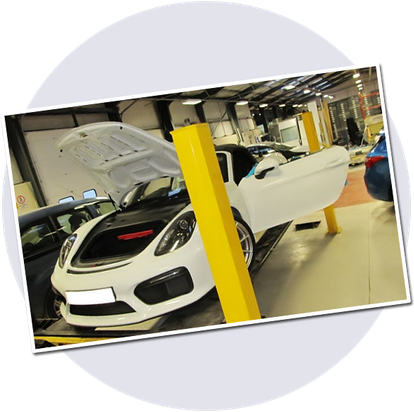 With a top speed of 180mph and a 3.8 litre engine, a 2016 Porsche Boxster Spyder is not normally the kind of vehicle you would expect to find adapted to provide disabled transport.

But for its owners, John and Paula Boggiano, the two-seater sports car is their way of showing that it is possible to live a life of adventure and excitement even if personal mobility is an issue.

Paula is confined to a wheelchair due to the debilitating effects of multiple sclerosis and cannot get in and out of any car unaided, let alone the sporty, low-slung Porsche.

However, in addition to that 375bhp engine, its six-speed gearbox and removable roof, the Porsche has an added feature that allows Paula to indulge in some German automotive perfection - a Milford Person Lift, fitted into the passenger footwell.

John and Paula have been regular customers of Autochair for the last 10 years, having had Milfords fitted into a succession of cars, the list of which reads like the running order from an episode of the British TV show Top Gear.

They started in 2006 with an Audi RS4, followed by an Audi S3, a Porsche 911 GT3, a BMW M235i and, finally, the Porsche Boxster Spyder. The lift has allowed the couple, who live in Widnes, Cheshire, UK, to experience the thrill of the open road all over the country and even put their cars through their paces on organised track days – including at the legendary Nurburgring in Germany.

Paula’s condition has deteriorated over the past decade and there may come a time when the couple have to swap their sports cars for something more sedate.

However, John says thanks to the Milford Person Lift and a sense of adventure, the couple have been able to indulge their love of performance vehicles well beyond the point at which other people would have been visiting their local car dealer to look for something infinitely more practical.

John, whose used to write for the British Porsche magazine Total 911, said: "Paula may not be able to drive anymore, but we can still take an annual trip driving around the Scottish Highlands, take our cars across to the Isle of Man, where there are no speed limits, or explore the roads in the Lake District and North Wales.

"I think that many people automatically assume that having a disability means that you have to undergo a change of lifestyle, but we have never thought that way.

"It makes living the life you want more of a challenge, but it can be possible to do what you want if you really set your mind to it.”

Autochair has fitted Milford Person Lifts into hundreds of different vehicles over the years and John says that he had so much confidence that the company would be able to find a way to install one into his Spyder that he did not check to see if it was possible before he bought the car.

He said: "I did take a bit of a chance but Autochair have always found a way to do it in the past and so it proved again.

"The design of the car means that it is not easy to get in and out of, but I would imagine that if Autochair can fit a Milford lift into a Porsche Boxster Spyder, then they must be able to fit one in anything.”